Thanks to Tom and Lorenzo, I've been seeing pictures of the spring haute couture collections, and I am LOVING that shit. Before I started watching Project Runway, I wasn't really interested in the collections, because I don't have the need to keep up with fashion that closely, but now it's just fun to look at what designers have done. This is especially true since I've been sewing again--some of the ways designers manipulate fabric are fascinating and super impressive. Also inspiring! Life is fun.

One fun thing about life lately is the Valentine exchange I've been doing with my internet friends. I made my Valentines last weekend and Francisco mailed them for me on Monday (had to buy stamps). I had an idea in mind for them but then last Saturday I woke up with a much better idea and went with that one instead. So much fun! This morning at work I floated the idea of a coworker Valentine exchange and some people jumped on board. Yay! This is exciting because we get to make construction paper mailboxes for the Valentines just like we did in grade school--the mailboxes were always my favorite part. I can hardly wait!

Naturopath report: The appointment went very well. I told her EVERYTHING about my ongoing digestive problem and cried all over her office (she didn't mind). She did a brief physical exam and then proposed a course of treatment that involves 4 different things. In order to be scientific with the plan, she had me start with one thing and then add the other things in, one at a time -- this way if something helps, it won't be a mystery as to which thing it is. So, I started with some herbal capsules called Bile Support (they make my pee smell like it does after eating asparagus, but there's no asparagus in them: mystery), and just today added in probiotics. In another 10 days or so I will add in amino acids, and a week or ten days after that I'll start hydrochloric acid pills (she thinks my stomach acid could be low). When I started taking the Bile Support, I really thought they were helping, but now I'm not sure they're helping, plus I have more pains in my upper abdomen. I'm going to keep taking them for now but will stop if the pains get worse or something else alarming happens. I have a follow-up appointment with the naturopath (who I really like) at the end of the month, and I HOPE by that time to have made some progress in the feeling better department. I am somewhat optimistic because I'm willing myself to be optimistic.

This week Twyla gave us a little armchair to take down to Shark and his Lady Shark (for Shark Baby and WOW I have really got to think of nicknames for these new people), but Francisco put it in front of the wood stove and Esther is in love with it. 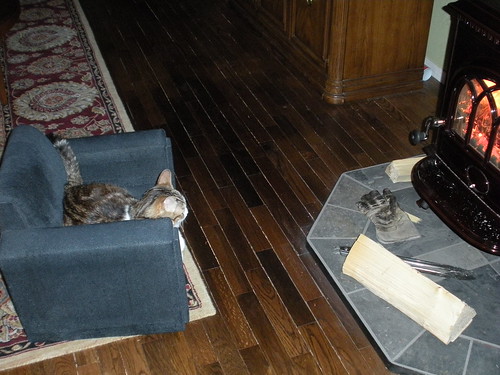 She sits in the chair and watches the fire, and I love seeing her do that so much I think we're going to keep the chair and just buy a new one for Shark Baby later. Soon I want to buy a tiny stuffed dog and 4 tiny slippers to put next to the chair, and I wish Esther would put up with having a tiny pipe in her mouth. I haven't tried it, but I'm pretty sure she would not allow such a thing.

So, speaking of the Shark, as I was, he and his fiancé will be moving to their own place in...well, a few days, I think. Later this month we're going to take them some furniture we have for them, as well as the microwave we have in the attic (we put it up there after moving to our house, which has a built-in microwave over the stove) and the dishes we have up there also that were Francisco's grandmother's. Actually I think I'll send them a photo of the dishes first, because I think they'll hate them, and why haul the box down there if we just have to haul it back? Also while we're there, I will attend the baby shower someone is throwing Lady Shark, but first I need to find out what big things (crib, stroller, etc) they already have promised to them, if anything, because as the grandparents it's our job to buy big stuff, yes? I don't know what I'm doing, but we'll just muddle through this grandparent stuff the best we can.

I've lined up a busy weekend for myself which includes all the normal stuff, plus a haircut, plus cleaning my office at work (which I could, in theory, do during the work week, but it's super filthy so I want to wear appropriate filth-cleaning clothes), and a UU board meeting. I'm also going to do some cooking and maybe a little bit of sewing. Oh! And possibly we will have a short visit with our friends and their 2 week old baby, but that's still up in the air. So anyway, busy weekend! Francisco isn't working either weekend day but tomorrow he's going to a shootenanny. I hope he wins.

Next week I work 4 days (taking Wednesday as my mandatory leave-without-pay day), and then I have the next two weeks off. I'd asked for the time off back when the Shark was going to get married on the 19th, and I'm keeping it because we're going down there for a few days to deliver the furniture, and also because I want the time off. I still have too much vacation saved up, so it's not going to be a bad thing to use some. I'll come to work for a little while on the morning of the 14th, for the Valentine exchange, but that's it. I can hardly wait to have that time off! I know I just took two weeks in November, but I felt horrible for almost a week of that time off (from the poisonous Ciprofloxacin), and really, is there such thing as too much vacation? It's good practice for retirement. 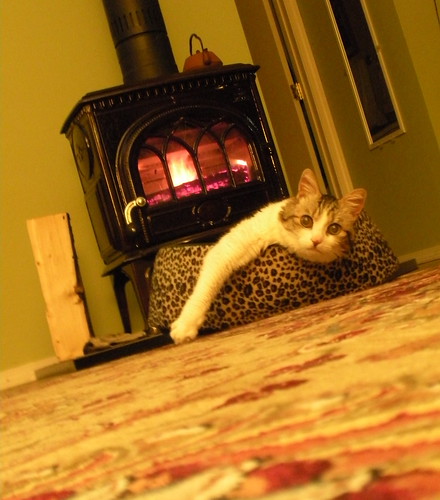